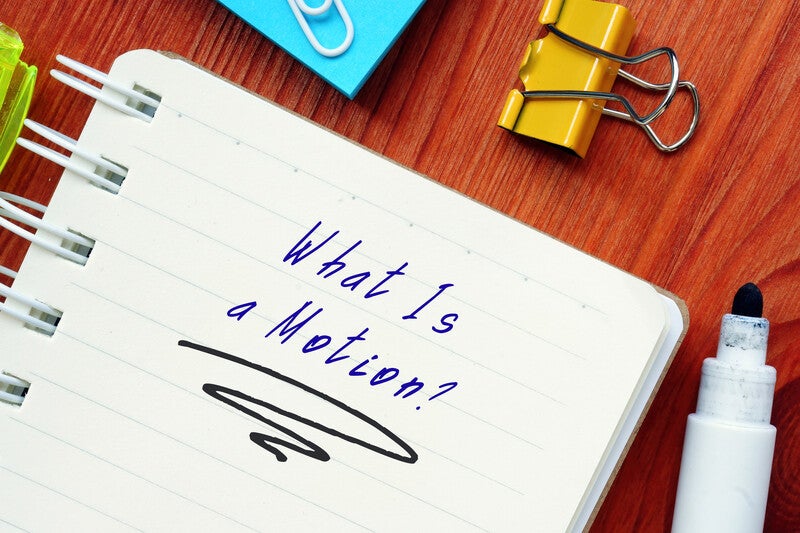 A "Motion" is a formal request for the Court to do something, and exactly what the Court is asked to do is set forth in each individual motion. Motions are the primary tool of defense attorneys to fight a criminal case in the courtroom prior to trial.

How Are Motions Made?

Motions are most often submitted as written documents, called "pleadings," which are filed with the court. Motions can also be made orally before the Court, although the Court will prefer to have written briefs, unless circumstances making briefing unnecessary or impractical.

Once a motion is filed, the Court will generally set the motion for a hearing. Prior to the hearing, the opposing party will usually file an Opposition, which is a pleading asking the Court to deny the Motion.

Depending on the nature of the Motion, the Court's hearing will either include a presentation of evidence (usually witness testimony), arguments from the attorney, or both. In some instances, the Court will decide to rule upon a motion without holding a hearing.

What kinds of Motions can be filed?

It would be impossible to list every single type of motion that can be filed, but there are a handful of motions which make up most motions filed in a criminal case. Think of it like Motions being different tools on the defense attorney tool belt. Common motions might include:

What does the Court do next?

Can an Order be Appealed?

Unfortunately, most orders made by the Court cannot be appealed right away. Ordinarily, only motions which produce a final judgment can be immediately appealed. In rare circumstances, an interlocutory appeal (that means an immediate peal) is permitted.

Where an immediate appeal is not allowed, the case goes forward until a final judgment, such as after a jury verdict and judgment of conviction. After final judgment, the party aggrieved by the earlier orders can file an appeal raising those issues to a higher court, but only where the issues sought to be appealed were preserved.

There is one method for immediate recourse to a higher court: the "extraordinary writ." An extraordinary writ, either being a Petition for Writ of Mandamus or a Petition for Writ of Prohibition, can be submitted to the Supreme Court of Nevada, challenging any ruling made by the lower court, even where those rulings are not subject to immediate appeal.

The problem is that these Petitions for "extraordinary" relief are almost never granted. The standard for obtaining relief is very high. The Petitioner must establish that the district court's Order is manifestly wrong and contrary to clearly established law. In other words, the Petition for Extraordinary relief will only be granted in exceptional circumstances where the district court's decision is well outside the bounds of its discretion.

What Motions Will Help Your Case?

Each case is different. A motion that might win a case for one defendant by getting the case dismissed, might not be a practical option in a different case. The only way you can be sure that the proper motions are filed in your case is by hiring a criminal defense attorney to help you through the process. Contact Liberators Criminal Defense today to set up a free consultation about the motions your case needs.

How Do Criminal Cases Work?